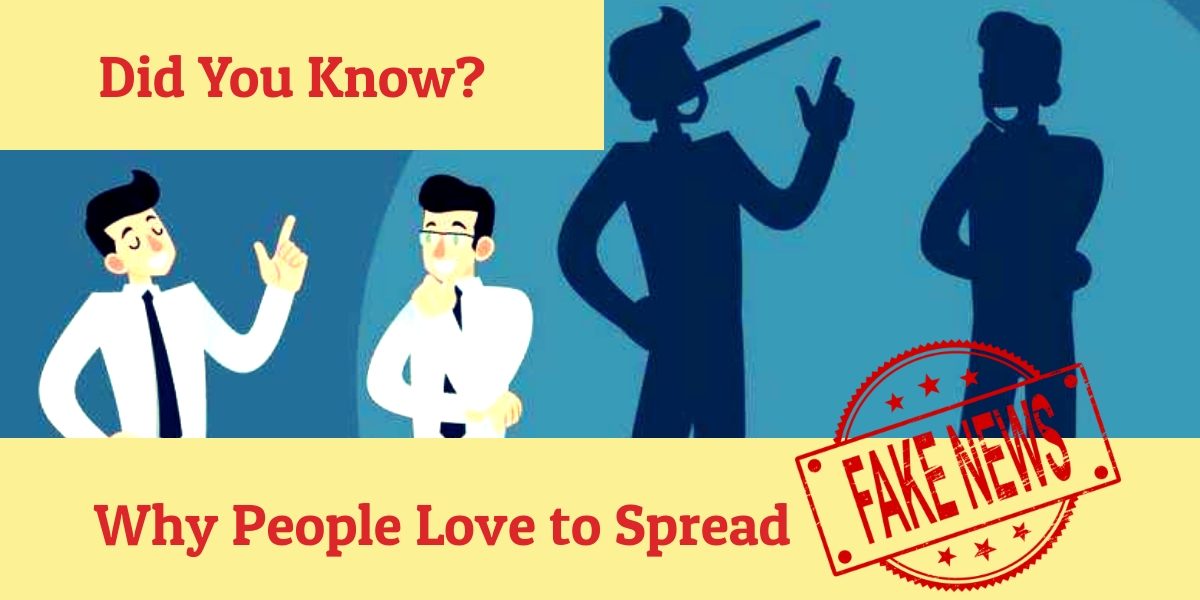 Nowadays, whenever you login into your social media accounts or the multimedia messaging application, you might encounter fake news on daily basis.

The fake news might not be able to influence an intelligent one like you, but the news is not meant for you, it is for the rest 90% of the population.

Most of the political nations of the 21st century are democratic in nature; when most of the citizens of a political nation start to learn from fake news, this quote of Mahatma Gandhi is far from becoming a reality,

Democracy has become a play of quantity, instead of quality; because the temples of the modern democracy, the educational institutions have been nurtured so that humans earn certificates to live in the state of reactive consciousness.

ALSO READ: This is How Education System is Destroying the Intelligence of the Young Minds

Whenever someone triggers the individual identity through a controversy, the people living in the reactive consciousness state love to spread the fake news. Suppose, you told one of the haters of Abraham Lincoln that, “Abraham Lincoln was really a vampire hunter”; this message will evoke his identity of hatred towards Abraham Lincoln, he will react and share the fake news.

As a conscious human being, you should not hate this kind stupidity; instead, your skeptical mind might ask; “Why people love to spread fake news?” Did you know the root cause of the spread of fake news? Stick with me to know in detail.

In this article, I shall let you know the very basic reasons why people love to spread fake news through two sections:

First, Training the Minds to React Through the Education System

So, without further delay, let’s get acquitted in detail.

Training the Minds to React Through the Education System

It is hard to accept that the education system has made a new organized religion of rote learning. Educational institutions are the temples of the modern world. But, what would happen when the modern temples spread a new religion, to believe in Data In – Data Out learning.

We all are the product of our practices. When a young mind is trained to practice READ, REMEMBER and VOMIT at the examination hall without analysis or understanding, the mind likely to follow the same pattern in the whole life; unless he or she upskill the consciousness.

“Education is not the amount of information that is put into your brain and runs riot there, undigested all your life.” Swami Vivekananda

But, the young minds have been trained to practice Data In Data Out. Most of them were never trained to use analytical skill, except in mathematics or science. So, most of the people practice READ and REMEMBER with fake news consciously or subconsciously and VOMIT it whenever related data triggers their brain.

MUST READ: [Participate in the Survey] How To Transform the Indian Education System

Utilizing the Reactive Nature by Creating Controversies and Triggering Identities

The society, the family, the political nation may throw many identities to a young mind. Identities may be thrown for good reasons, or for bad reasons. It is up to the individual’s perception.

At the same time, some kind of pseudo-nationalist will throw the idea of a nation on a piece of cloth or on a song. Someone will be brainwashed through repeated direct or indirect marketing tactics to believe in a charismatic leader; even hatred is also marketed in modern times.

Intelligence and identity are inseparable; you might have observed on your television screen how political spokespersons try to justify their opinions based upon their identities.

ALSO READ: This is How Identity is Creating Division and Violence

As I said, the education system has trained most of the people to live in a state of reactive consciousness. When their identity is triggered for good, bad or any reason; they react, instead of responding.

Suppose, John, a 30 years old man living in the state of reactive consciousness has been programmed through direct or indirect marketing strategies to become a fan of Abraham Lincoln and he started hating Andrew Johnson.

Another day, John got a message that Abraham Lincoln was awarded Nobel prize for 5 times. Since he was a fan of Abraham Lincoln, he reacted and spread the news.

Since his mind was trained to READ, REMEMBER, and VOMIT, he never bothered to check facts before accepting or believing anything; so he reacted when his identity was triggered.

READ NEXT: This How Education System is Destroying the Intelligence of the Young Minds

People will be influenced by social, commercial or political campaigns until the education system train the young minds to reach the formal operational stage of cognitive development.

Did you know, most of the people of this planet fail to reach the formal operational stage?

When people reach this stage of cognitive development, then it would be effective to teach them self-awareness, empathy, consciousness, or any kind of higher cognitive skill. Otherwise, these skills will be a lesson of morality for them, instead of reality; and they will start seeking miracle in the charisma.

READ NEXT: [Participate in the Survey] How To Transform the Indian Education System