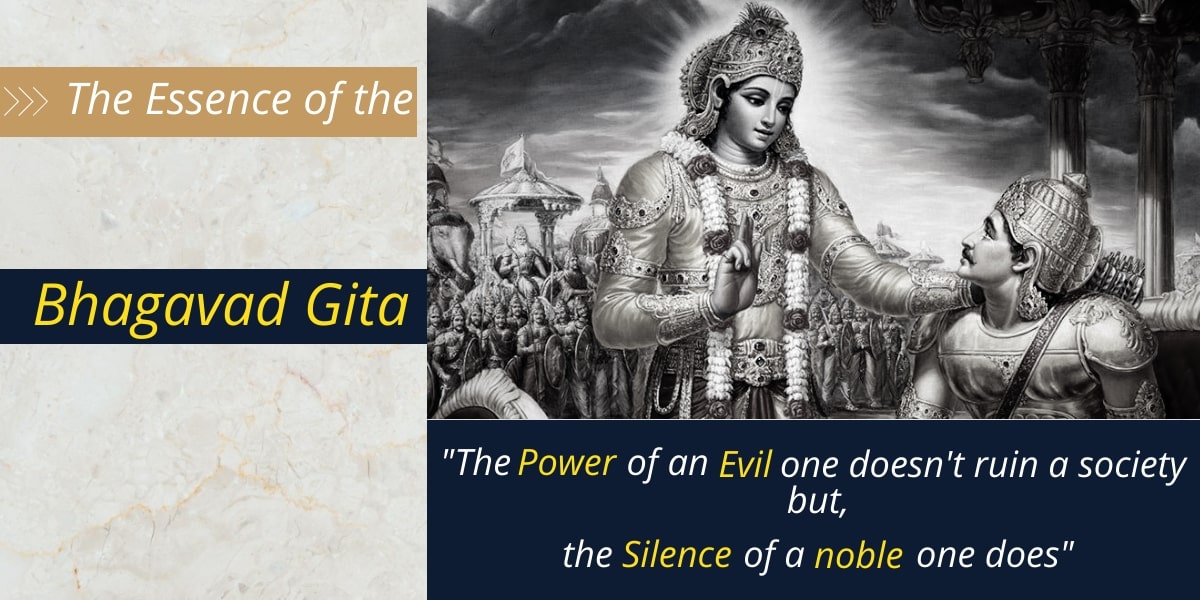 Bhagavad Gita is a book of the universal constitution, where no amendment has been made so far. How can it be amended, such a great piece of literature, anyone can understand on his own way.

The insightful conversation between Lord Krishna and Prince Arjuna in the battlefield of Kurukshetra talks about duty, righteousness, human psychology, empathy, self-awareness, and these are a few to mention.

You are reading this article because you are seeking the true essence of the Bhagavad Gita, whether you read the book or not.

Lord Krishna delivered His wisdom through Samkhya Yoga, Bhakti Yoga, Karma Yoga, and Jnana Yoga; I shall not talk about Yoga, instead, I shall try to deliver the essence of Yoga according to the contemporary world.

So, in this article, I shall let you know my understanding of the essence of the Bhagavad Gita through four sections.

1. The Power of an Evil One Doesn’t Ruin a Society, But the Silence of a Noble One Does

You know that Lord Krishna delivered his wisdom when Prince Arjuna was in the fear, anxiety, and confusion of killing his own family members.

King Pandu, Arjuna’s father, a righteous king, left his kingdom and became a monk. When righteous Pandu left his duty of a king, all the evils started to happen in his kingdom. While Draupadi, the wife of Pandavas was humiliated in the royal court, the silence of Bhishma, the capable warrior, and their grandfather let the brutality happen, and that brutality ultimately led to the Kurukshetra war.

So, Lord Krishna, the kingmaker, asked Prince Arjuna to do his duty without traveling time in anxiety or fear. Prince Arjuna, a warrior, his duty was to fight, to kill his opponent.

If Prince Arjuna keeps his silence, by not performing his duty, his karma, the evil Kauravas will not stop, they will keep damaging the society.

So, in essence, if Arjuna avoids his duty like his father Pandu or grandfather Bhishma, the evils would rule the society.

“Now I became death, the destroyer of worlds”.

Don’t you think the invention of nukes made it possible to stop the World War-II.?

This kind of situation happens, probably this is a time where evils might be ruling in many aspects; but, your identity determines what is evil and what is noble, for Kauravas, they were also right and noble.

2. Being Attentive is the Key to Get Anything in Life

A society needs manpower in the top, mid, and bottom levels to run itself. Someone may do repetitive tasks, someone may do managerial tasks, and someone may do core planning & decision-making tasks. All of them are an integral part of a society, all are interdependent.

Top & mid-level manpower need to have active listening, critical thinking, active speaking, and these are few to mention.

Don’t you think all of those skills need you to be attentive?

Devotion or Bhakti basically means to pay enormous attention to something or somebody. In Hinduism, there are millions of gods and goddess to pay Bhakti, you can have your own god, say your goal. When you are devoted to your goal, don’t you think you can achieve anything you want in your life?

3. You Can Master Anything Only Through Self-Introspection

“Learn everything that is good from others, but bring it in, and in your own way absorb it; do not become others.”—Swami Vivekananda

In the Bhagavad Gita, Lord Krishna told Arjuna about the Samkhya Yoga, the yoga of analysis and self-introspection. If you don’t ask yourself questions, you can’t analyze anything; I think you might be asking questions to yourself, knowingly or unknowingly.

Self-introspection is the key to unfold hypothetical thinking, deductive thinking, and metacognition- the skills developed in the formal operational stage of cognitive development, but the bitter truth of this planet is that, as published by Arnett Jeffry in his book Adolescence and Emerging Adulthood: A Cultural Approach, most of the people fail to reach this stage. And, as a consequence people start to live in blind faith, nowadays most people believe in fake news; because their consciousness only reflects, their mind is not trained to introspect.

4. Empathy and Self-Awareness are the Most Important Goal of being wise

Wisdom is when you become controller of your mind and you have the empathy towards all the creature of this nature.

“For one who sees Me everywhere and sees everything in Me, I am never lost, nor is he ever lost to Me.” Chapter 6, Text- 30

If you believe the above quote, you have knowledge about but didn’t get the wisdom from it.

In the Bhagavad Gita, Lord Krishna talked about Jnana Yoga or the Yoga of Wisdom, and the above quote is a quote of self- awareness.

Did you know why?

This can be understood through self-introspection, let me tell you why this quote is about self-awareness.

In the ecology class of high school, you have studied the food cycle, the importance of all creatures to make your life possible. Your physical body is living on this planet because of the natural condition we have, the sun, the moon, the animals, the trees make our physical life possible. If these are not present in nature, could you live?

A few people might try to impose religious authorities on Bhagavad Gita; I don’t blame them, their immature mind has not reached the formal operational stage of cognitive development. That’s why they fail to understand the basic difference between religion and Dharma, religion is a personal belief, nobody should have any business with one’s personal life. On the other hand, Dharma is a universal duty, righteousness, and the basic way of existence, the Bhagavad Gita is about Dharma, it is beyond religion, it is not personal, it is universal.

I have designed Be Your Own Life Coach series according to the core essence of the Bhagavad Gita and cognitive psychology, to make you a conscious intelligent by boosting your cognitive functionalities. If you haven’t, do check it out.

How did you get the essence of Bhagavad Gita? Please do let me know in the comment.