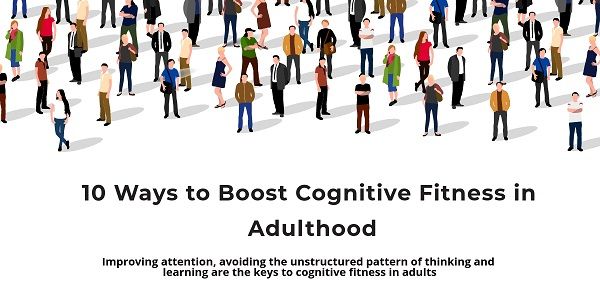 Cognitive fitness is the reflection of our practice. Improving attention, avoiding the unstructured pattern of thinking, learning, and asking questions to oneself are some of the keys for cognitive development in adults.

Before getting started, you should know that,

We normally think about the importance of cognitive fitness during early childhood. While we forget to boost cognitive functionalities that remain steady throughout early and middle adulthood.

Why is cognitive fitness in the adults so important?

As an adult, you have to invest in yourself. Your earning can increase when you focus on learning.

After leaving an academic career, most of the people think that we have to earn only and forget about learning. One of the studies on adult neurogenesis shows that when we learn something new or engage in new activities, our brain rewires itself just like babies or children, and hence improves cognitive fitness.

“Postformal operational thinking” is often described as more flexible or logical. In this stage, people are willing to accept moral or intellectual complexities, and dialectical than previous stages in development. Dialectical means any formal system of reasoning that arrives at the truth by the exchange of logical arguments.

Early adulthood is the time of relativistic thinking, where young people become aware of more complexities in life. However, very few people tend to do so, and most of the people practice unstructured pattern of thinking by indulging themselves in gossips or addictive internet application.

Without further delay, let’s get started with the cognitive fitness exercises for adults.

What are the ways to boost cognitive fitness during adulthood?

“Improving attentions means training the mind to realize when and how attention wanders away and bringing the attention back when it wanders away.”

Attention has three types, viz. sustained, divided or selective. However, most people fail to have sustained attention.

You should know that attention is a practice. To have sustained attention, you have to practice bringing your attention back whenever it wanders away.

Selective attention or divided attention can be improved through meditation and practicing mindfulness. You have to be conscious of what you are doing; also you have to be the controller of your mind. Otherwise, waiting thoughts or external sensory interrupts are always ready to distract you.

2. Ask Questions to Yourself

“Asking questions to oneself is the key to improve deductive thinking.”

Have you ever tried asking questions to yourself while solving a problem, making a decision, applying logic or deducing a reason?

You may be already doing it subconsciously. If not, start asking questions to yourself while applying logic & reasoning or making a decision. And when you start practicing it, it will become your habit, and then you will become an effective problem-solver or decision maker. And finally, your wisdom or insight will thrive.

Humans mind needs engagement; the mind takes rest while we sleep. When you don’t engage your mind, it loads any memorized thoughts or external sensory inputs. Consequently, you are causing the unstructured pattern of thinking.
Let’s do a simple exercise, close your eyes and let the mind do whatever it wants to do. And observe how many thoughts are ready to distract you.
However, in this case, you are willingly letting the mind to control you. While you don’t know how & when your mind controls you subconsciously.

You have to discard a lower taste to achieve the higher one. When we provide a negative diet to our brain, the mental diets transform into thought. And as I mentioned in the above section; all the thoughts are always ready to distract you.

I am repeating once again, our words or actions are the reflections of our mental diets. If you don’t agree with me, watch a comedy video and then a sensual image; and observe how your thoughts travel.

It is an action based on reflex action and engagement of the mind subconsciously. You can know more about it in the brain model.

As I mentioned earlier, when you don’t engage your mind, thoughts or external sensory inputs are always ready to control your mind. Give the mind a structured engagement, related to your life and purpose.

Let me explain an example of the unstructured pattern of thinking.

Are you in social media?

Open a social media platform in a new tab and scroll the home page. Observe how many images or videos having different emotional/rational call to action are ready to engage you. Sometimes you got engaged to these subconsciously, did you?

It’s good to use social media when it is relevant to you and they are providing a good platform to explore yourself. However, you have to engage your mind with the relevancy. We all have 24 hours in a day, what will happen when you waste one hour of life by providing irrelevant mental diet. And that is the difference between a successful person and the rest.

As I mentioned earlier, one of the studies on adult neurogenesis shows that cognitive fitness improves when we learn something new. There is always something to learn for your career, life, and living.

You can learn by watching a documentary instead of watching a fictional movie. Watching TV, news, sports can be the easy source of learning. However, don’t forget that there is a huge commercial campaign going on to generate recall values through repeated actions. And all these can cause the unstructured pattern of thinking.

You should play games which need the ability of thinking, analyzing and planning. At the adulthood, the brain begins to lose concentration, which can impair memory. But, you need to be a strategic thinker, planner or a decision maker in various aspects of life and career.

You can play crossword, Sudoku, Lumosity, Chess or Backgammon. These games improve cognitive abilities by stimulating different areas of the brain, including parts responsible for problem-solving, memory, and attention span.

Lumosity is created by neuroscientist and it has been shown to battle dementia and stave off memory loss, improving memory retention as you age.

Daily exercise increases blood flow to the hippocampus, this organ is located within the medial temporal lobe. The hippocampus is associated mainly with memory, particularly the long-term memory and it regulates our emotions.

One of the studies found that aerobic fitness reduces brain tissue loss in aging humans. We need learning skills, problem-solving skills, and decision-making skills and for all these, we must have good retention or memory.

You can practice Surya Namaskar Yoga; this yoga takes only a few minutes and helps to improve blood circulation throughout the body.

Stress, anger or any extreme emotion can alleviate memory and energy. You have to be physically & mentally fit for improving cognitive fitness.

One of the studies by Harvard Medical School, neuroscientists have discovered that chronic stress and high levels of cortisol can damage the brain.

The question is how can you reduce stress?

Stress is a thought process that hijacks your intelligence and engages your mind completely for that particular moment. As I said earlier, your mind needs engagement. You have to replace the thought of stress.

When stress attacks you, take a deep breath, focus on finding a solution. And if there is no solution available, replace the mind with other activities. But, don’t let the stress damage your brain and cognitive fitness.

Sleeping well is the key to healthy living and hence cognitive fitness. During sleep, reorganization of brain cells or muscle takes place and refreshes our mind. Our long-term memory is like the capacitive memory of a digital computer and refreshing is essential for a better memory.

You can see in the brain model that your all cognitive functionalities are depended upon the frequency of neurological signal or brainwaves.

When you don’t get enough sleep, you have the chances of abnormal neurological activity, headache or other mental turmoil. And it causes ineffective decision-making, problem-solving or rational thinking abilities.

The most important part of adult cognitive fitness is attention, avoiding the unstructured pattern of thinking and learning. You should make a regular plan to boost your cognitive abilities. Start meditating while you wake up and then don’t forget to exercise only for 5-10 minutes a day.  Also, read books or play memory games while you have enough time. And don’t forget to invest in yourself.